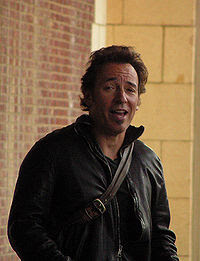 What is it about Bruce Springsteen that makes him such a boss? We have a discussion on Facebook, where one of my singingfriends thinks that he is lacking musical talent. Many would disagree with that.

Besides his existing or non existing musical talent, there is something else that makes him almost magic. I would say that it is partly his charm, partly his genuinity. He´s got IT. He could be one of us, he is nice and humble, he sings about everyday life and plays with joy. That is enough for me. I like him.

I also think that his consistency in music and fellow musicians gives us some kind of comfort. He was there when I was a teenager and he is still here with the same kind of music, partly the same band and the same harsh and handsome look. Maybe he is immortal and forever young. That would be nice.

The Boss is playing in Stockholm this week. I could hear him across the city all the way back to my house, kilometres away from the concert. It was a treat.
Upplagd av Anna-Karin Lingham Inga kommentarer:
Skicka med e-postBlogThis!Dela på TwitterDela på FacebookDela på Pinterest

Zlatan Ibrahimovic is one of the best soccerplayers in the world. Growing up in the suburb Rosengård in Malmö and becoming a world-icon, he has certainly built an interesting brand. Part of his brand is his voice and his accent from the south of Sweden. It is charming and a bit cocky in a nice way.

Listening to Zlatan is always entertainment, not only because of what he is saying, but also how he is saying it.

Our voices are important parts of our personal brands. I enjoy listening to different accents and different sounds. It is great when voices are authentic and give a hint about where the person has his or her origin.

Your voice can express many different things. In order to give a positive impression, you should make sure that you have a confident voice. Stress can give you a sore throat or a higher pitch than normal and it may make it hard to listen to you. Calm down before you speak in important situations. It will make a big difference to your message and to your image.
Upplagd av Anna-Karin Lingham Inga kommentarer:
Skicka med e-postBlogThis!Dela på TwitterDela på FacebookDela på Pinterest

So I got myself a new fancy mobilephone. It seems quite alright, but there are two details that bother me. My contacts and my textmessages won´t move with me to the new phone. They are stuck in the old phone. I´ll have to rewrite hundreds of contacts, since my old mobile isn´t fancy enough to connect to a computer in a correct way. I´ll be busy rewriting contacts on the train up north tomorrow morning...

Some details may be quite important for a customer. Never underestimate the details.