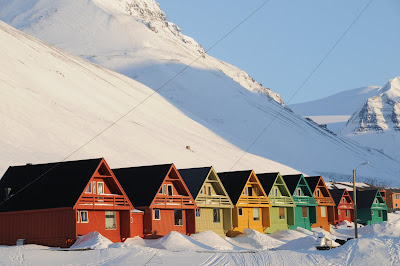 On Svalbard, there are no trees. In the winter, the landscape is all white. In the summer, I believe that it would be green, brown and white, since there is grass, some mosses and lichens next to the glaciers.

Because of this finite scale of colours, you are only allowed to use happy colours from a specific palette when you paint your house on Svalbard. Yellow, red, green, blue... This makes Longyearbyen quite sparkly, despite the pale natural coulours. An interesting way to brand a village. 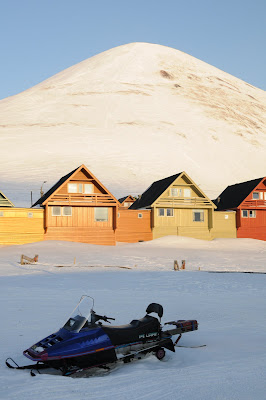 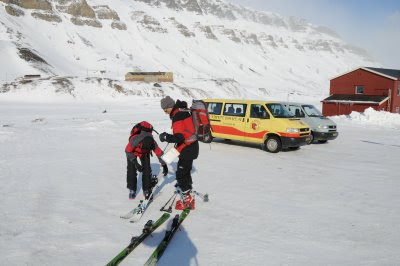 Our maingoal on Svalbard was to ski up and down some mountains. And so we did. We took a taxi to the outskirts of the village Longyearbyen, put our climbing-skins on our skis, and started climbing up the glacier. 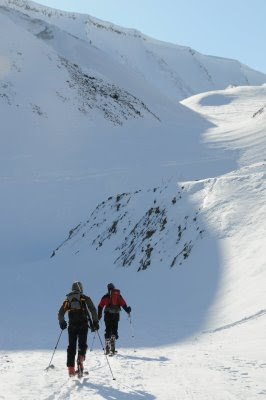 Our first day in the mountains was fantastic with beautiful sunshine and clearblue sky. 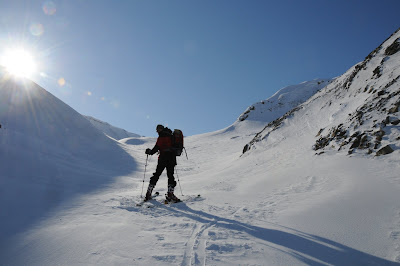 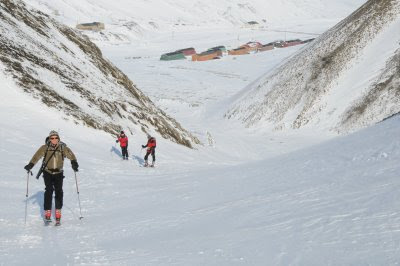 You don´t want to be anywhere else on a day like that. However, the weather can change in a minute. Therefore it is important to use a map, compass and GPS as much as possible, to make sure that you´re ok even if you´re surrounded by fog and clouds. We noticed that the compass and GPS didn´t work so well. The compass didn´t show the right direction and the GPS didn´t have a map of Svalbard. It seems like the GPS-maker considers Svalbard to be too far up north in the wilderness to cover by maps. 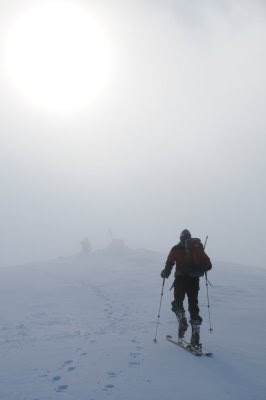 Skiing towards a mountaintop can be dangerous if you´re on steep mountainsides where there is risk of avalanches. You need to be cautious and observant when it comes to the quality of the snow. 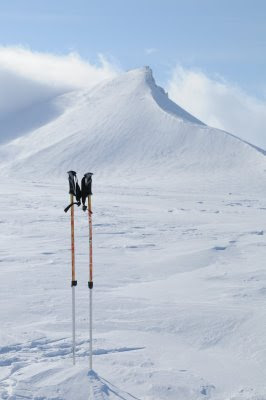 We had a great trip to the top, although we were surrounded by clouds for a while. We also had a great race down in the powdersnow. It is easy to be happy on an adventure like this, with the favorite skis working perfectly. 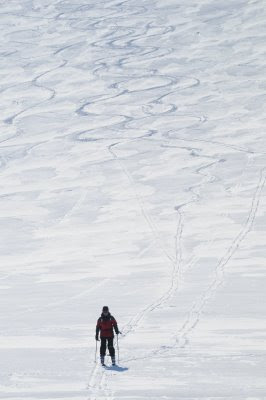 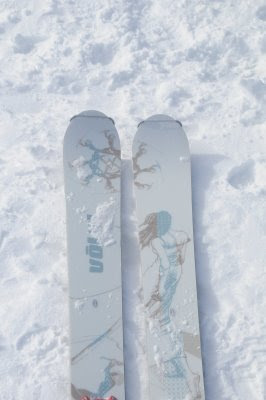 The Artic Sea by Barentsburg 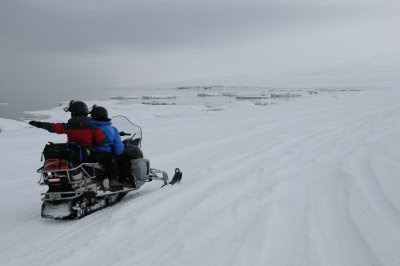 It is an adventure to leave the biggest village on Svalbard - Longyearbyen, which is Norwegian - to go by snowmobile to the Russian settlement Barentsburg. The distance is about 60 km. If you drive fast you can get there in less than 2 hours. However, driving slow is nicer since there is alot to see on the way.

Since there is midnightsun on Svalbard at this time of the year, we could start our trip late at night and scooter along the sea until long after midnight. 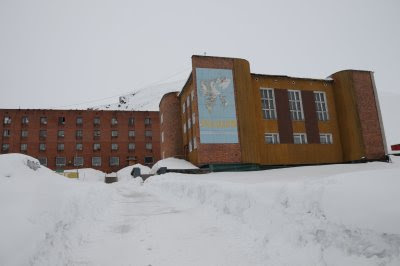 There are about 500 inhabitants in Barentsburg. Most of them used to work in the coalmine, which is closed at the moment due to a fire where people died. The mine will not open until late 2009 at the earliest. While the mine is closed, the workers are assigned to tidy up the village by painting houses and cleaning everything up. It was hard to tell if this job had started or not... Many buildings are not inhabited, and many windows are broken. 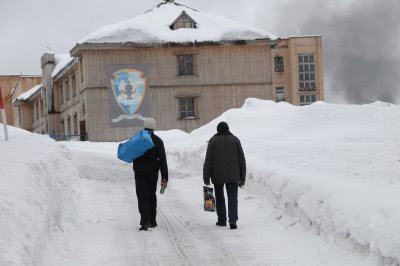 Barentsburg is one of the most different places I have ever visited. We only saw 5 or 6 persons - all men - walking slowly through the village. They came from the sports centre, which is said to have swimmingpools and a footballground. Actually one woman passed by on a distance, dressed in a grey wintercoat. 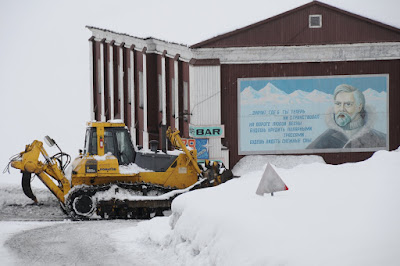 The museum was closed - natural in the middle of the night... - and so was the bar. 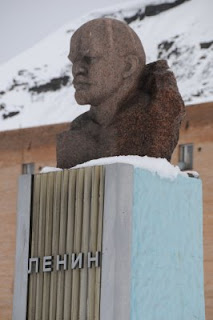 The worlds second most northern statue of Lenin overlooked the village. We stayed for a little while to take pictures and absorb the special athmosphere and look at the architecture. Then we returned back to Longyearbyen.


While snowmobiling between these two different places, we passed by the Arctic Sea. It was magic. Lots of icebergs in the black sea and white mountains in the background. Beauty and silence... 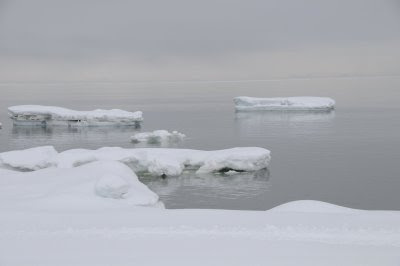 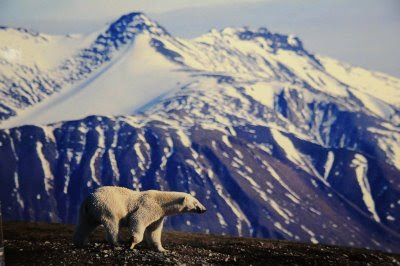 Before we went to Svalbard, I was told stories about people being attacked and eaten by polarbears. Because of this, I surely had a lot of respect for the wilderness up there. I found some important information about one of the world´s largest predators in a Svalbardpamphlet: 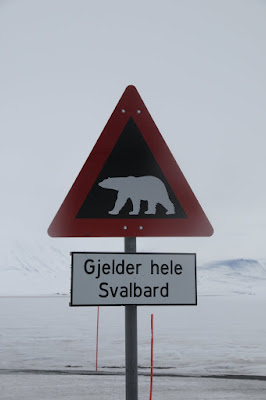 "There are between 2000 and 3000 polar bears in the Svalbard area. The average adult bear weighs between 200 and 800 kg. Humans are foreign elements in the kingdom of the polar bear. The bear is extremely powerful and it can perceive us as potential prey. Even young animals, weighing less than 100 kg, can be very aggressive and dangerous.

Be well prepared!
* Always be alert. Be aware of your surroundings, and keep to open areas.
* If you see a polar bear, retreat calmly and slowly. Never follow it!
* Most polar bears visits occur when camp has been established. If you are in a group, sit facing different directions so that you have a good view of the surroundings.
* Avoid placing campsites along the coast. The water and ice edges are natural places for polar bears to search for food.
* Use trip-wires with flares around the camp.
* Place food well away from the tent, but within view from the tent opening.
* Never prepare warm food in the tent. Polar bears are attracted to food odours.
* Be correctly armed at all times. Appropriate self-defence weapons against polar bears are big game hunting rifles and in addition a flare gun.
* Familiarise yourself with the use of these weapons before moving into the field. " 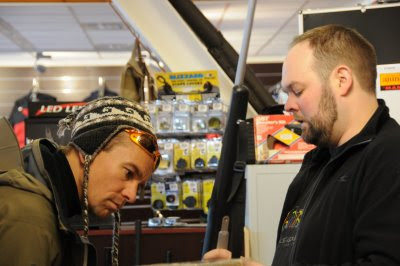 We didn´t see any live polarbears. That´s fine with me, although it would have been fantastic to see one on looong distance. I was quite alert - looking around myself every now and then to make sure that there was not a polar bear sneaking up from behind...
Upplagd av Anna-Karin Lingham Inga kommentarer:
Skicka med e-postBlogThis!Dela på TwitterDela på FacebookDela på Pinterest

Putting the teams together 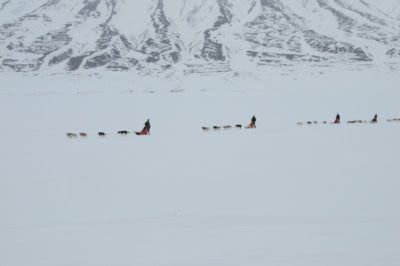 When we were skiing back down from one of the mountains on Svalbard, I found a note dropped on the snow. Curiously I picked it up. It didn´t take me long until I realized that it was a plan for how the team of dogs would be put together for a specific trip at 10 o´clock on a certain day. I really enjoyed reading the names of the dogs and how they were paired together. Maybe this is most fun for us Northeners since the names are in Scandinavian language: 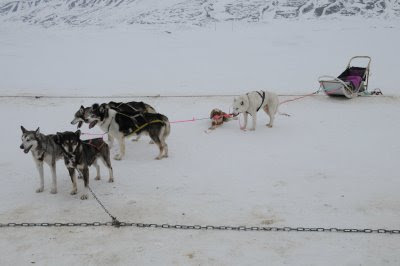 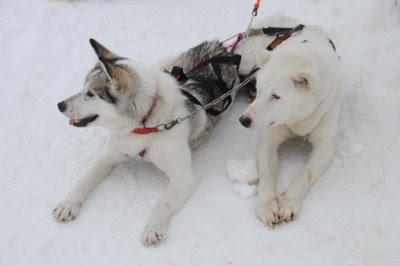 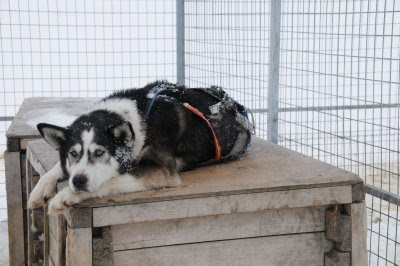